Can AI spur on the next pollution revolution? 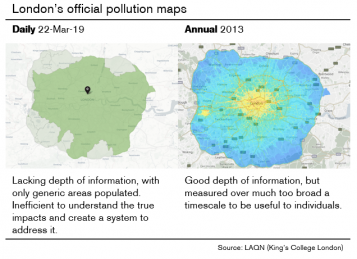 Can AI spur on the next pollution revolution?

Air pollution is a constant blip on the radar of the World Health Organisation. Yet solutions always seem to start and end with lowering emissions at the source. AI and Big Data will play an important role in reducing the impact of pollution.

Reducing pollution at the source is a long-term challenge for humanity. So long-term in fact that no-one quite knows—or is willing to forecast—a time in which we will be carbon neutral globally, let alone emissions-free. Polluting fuels (95% of global transportation energy[1]) are so vital to modern life that no amount of pressure placed on carbon-heavy industries to reduce emissions, will create a short-term plan for reducing emissions at the source. Take the ‘Euro’ regulations on road vehicle emissions introduced in 1992. Ever since then the pollution of the automotive industry has been under increasing scrutiny, but twenty-six years later (data as of 2018), only 2.5% of UK new car sales are for EVs.[2]

Rapid change in industries like these has not been hampered by cash-hungry management or a lack of regulation. Instead, slow progress is really due to the sheer costs involved. For a total migration to electric cars, significant technology investment from manufacturers must be combined with careful investment from local infrastructure. And with manufacturing competition cutthroat, there is little scope for engineering experiments, particularly when the cost for developing an all-new electric vehicle “can be as much as $6 billion” according to John Wolkonowicz, Senior Auto Analyst at IHS Markit.[3] A single new release which flops can spell the end for a car manufacturer.

And the only common pathway to reduce industrial pollution is more regulation. For politicians and policymakers it is the trigger which remains depressed, lest they erode their popularity. But further regulatory pushes may take humanity further away from its goal. To return yet again to the auto industry, the Volkswagen emissions scandal—uncovered in 2015—is a case in point. Over 11 million Volkswagen cars worldwide had been installed with devices designed to defeat emissions tests in various jurisdictions.[4] The potential cost of producing underperforming cars had to have been greater than the pressure of new regulations. And the investigation which followed uncovered similar devices from others including but not limited to Volvo, Renault, Jeep, Hyundai, Citroen and Fiat.[5]

Finally—amidst mounting regulatory and popular pressure—there are still industries which fly under the regulation radar altogether. Cruise ship operators like Carnival[6] and Royal Caribbean[7] are issued the occasional fine for dumping oil, but the amounts are in the millions—significantly smaller than the tens of billions demanded from Volkswagen. However, a 2017 study finds that Carnival’s ships around European coasts alone emitted more than 10 times more sulphur oxide than all 260 million European cars combined.[8] Royal Caribbean ranks second, four times worse than the European car fleet. The international nature of the cruise industry makes regulation difficult: nations with any income from tourism place themselves at a significant disadvantage if they introduce more stringent emissions and marine fuel standards. The resultant impasse has caused cruise ship regulation to become stagnant. This international roadblock phenomenon is not limited to Europe and the cruise industry. For many developing countries, fossil fuels are still the ticket to growth and development. Alternative power will never be a focus until entire populations sit above the poverty line.

Clearly, reducing air pollution at the source presents a complex set of problems. There is little doubt a solution will be found eventually, but the inevitable interim cost—both financially and socially—will be huge. Well before then we must also direct our attention to reducing air pollution at the point of impact. Practically, this means considering not only measures to reduce the introduction of pollutants into the atmosphere, but also measures to reduce the ease with which those pollutants enter our lungs. This is perhaps a more durable protective measure—long after we achieve zero emissions, we will still be susceptible to the atmospheric pollution of prior years.

The focus of this article is not to delve into the current strategies available for pollution reduction, but to highlight our poor understanding of the ways in which pollutants exist in our environment. Part of the reason prevention at the point of impact is so poorly implemented (at least outside of Asia) is that the only strategy which has been considered realistic is physical protection—e.g. face masks. Large scale air purifiers such as smog towers are extremely expensive, inefficient and require electrical power (which is still 60% reliant on fossil fuels in the UK in 2016[9]). But using existing technology there is another opportunity to reduce the impact of air pollution: developing a real-time pollution map.

A real-time pollution dataset will help us tackle pollution prevention at the point of impact. And even though it isn’t the be-all and end-all in this fight, it certainly provides return on the investment. For instance, the data can be used to route traffic intelligently, preventing pollution hotspots in major cities, or it can be given to governments in the hope they can quantify the impact of their policies. The Ultra Low Emissions Zone in London is a good example of this potential use case: with a real-time dataset, there will be quantifiable data about the policy effectiveness. But the dataset would also deliver secondary information benefits: a more informed population drives change, and academic research into air quality will be bolstered by increased data availability. Truthfully, we can’t know exactly what benefits such a development would bring. But this shouldn’t be a cause for delay: air pollution kills 4.2 million people each year (according to the WHO).[10] From a moral as well as an economic standpoint, we should be firing on all cylinders. We can open our phones and choose from a whole host of weather apps, yet accurate pollution forecasts are a rarity in even the biggest cities.

To make matters worse, the available air quality data is mostly poor. London is a good example of this: putting aside academic or policy-driven studies which measure air quality in great detail within certain boundary conditions, the closest thing we have to a true real-time pollution dataset is the London Air Quality Network. In this scheme founded in 1993 and run by King’s College London, local authorities around London fund individual and stationary pollution monitoring stations. The data is then collected and processed by the Environmental Research Group within the university. They produce annual reports, daily forecasts and a “Nowcast” which is like current weather for air quality (all of which can be found here). [11]

So what’s the problem? Comparing the daily and annual maps below, the data tells us remarkably little about the day-to-day variations in air quality around London. After all, there are only a few stationary sensors in each local authority. There are clear gaps around large areas such as Kensington & Chelsea and Hammersmith & Fulham, too. Although likely not the fault of KCL, the LAQN provides little practical use in a real-time dataset.

The challenge is cost. Creating a public, real-time monitoring network with enough accuracy to measure variations in pollution across streets would be extremely expensive. KCL even state how difficult it is for them to create accurate data on the homepage of their website: “Establishing and running a monitoring site requires a large investment, and it is not possible to put monitoring everywhere”.[12]

And even with an extremely large deployment of sensors, the accuracy of the dataset could be influenced by external factors. The variability of air quality is very high – moving by just a few meters, or taking the next road across can wildly change pollution levels. The solution lies in artificial intelligence.

AI is very good at spotting patterns and making predictions within data. With a mesh network of sensors and inputs from external factors, AI can fill the gaps between sensors with realistic values depending on the conditions. A map in similar resolution to that published annually could be published daily. And there are many examples of similar successful AI projects. For example, in China, Alibaba Cloud has developed the “ET City Brain” (shown below). This is an AI platform solution designed to monitor and control traffic flow throughout the city via drones and cameras. AI is used both to optimize the resources used (such as where and when drones are deployed), and to actually control the traffic flow by changing traffic light timings, finding illegal parking or other traffic violations, and helping to route emergency services.[13] This is a clear demonstration of AI’s power to interpret and process complex data.

The implementation of AI could solve another cost problem, too. Cardiogram—a new Apple Watch app—can accurately detect heart conditions like Atrial Fibrillation using nothing but a simple optical sensor.[14] To put this into perspective, such heart conditions usually require a specialist with a  12-lead electrocardiogram. But the apple watch gets it right over 97% of the time thanks to AI.[15] Leveraging this technology within pollution sensors could make them smaller and cheaper, massively reducing the cost of implementing sensor networks across cities. There is certainly scope: at the moment a professional “all-in-one” air quality monitoring station made by market leader AeroQual, costs between $2,000 and $4,000—and is the size of a large suitcase.[16]

The airband, a personal wearable air quality monitor, bridges all these ideas. It will fill the gaps in air quality monitoring and provide an unheard-of accuracy in pollution data. Like a Fitbit for air quality, airbands are linked to a clear mobile app to display data. The airband directly measures 3 key gases, from which AI calculates particulate concentrations.

Every single airband sends data back to our servers, where we can aggregate it to create a large and truly granular pollution map – the first of its kind. Each airband is part of a wider mesh network, allowing data to be crowdsourced dynamically as people move around. Naturally, all data is anonymized at the device-level to ensure privacy.

And once again, AI fills the gaps in our mesh, modelling the distribution of air pollution over time and space. We can use a predictive index to fill temporary spaces where and when we don’t have data. And by collaborating with existing infrastructure projects, we can verify, validate, and calibrate sensor inputs, bringing our data to a completely new level.

Personalised air quality monitoring has a clear use case in high pollution exposure workplaces. Firms will be able to use bespoke software to monitor and manage their employee’s exposure to air pollution – protecting both productivity (air pollution has been linked to a 2.4 billion decrease in GDP) and worker health.[17]

We will deliver a revolutionary air quality dataset, and new opportunities for individuals, firms, and governments to mitigate and perhaps eventually prevent air pollution. But perhaps the most important benefit of this data, for us today, will be the increased awareness of the air pollution problem. We are all impulsive beings who react to experiences and not statistics. Pollution is hidden and unfortunately by the time it becomes bad enough that we can see it, it will probably be too late.

Our data will try to make clear that we can individually do something to help protect ourselves. Whether it’s taking a slightly different route or changing your mode of transport, we can all make a huge difference in daily pollution exposure which does actually add up over time. You’re probably thinking: really? And it’s that reaction which we are trying to change.

AI Expo Europe to kick off next week. Register today!