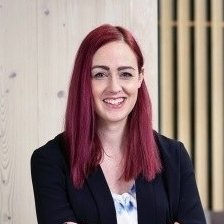 Emma was diagnosed with Parkinson’s at the age of 29. Making it her mission to raise awareness about the condition and continue her life as she planned, Emma campaigns and shares her story on social media, published her own book on dealing with Parkinson’s and in 2017 video blogged her life for 365 days.

In 2015 Emma won the CharityComms Inspiring Communicator award for her fundraising for Parkinson’s, is one of MT’s 35 women under 35, has been dubbed ‘One to Watch’ by Wired Magazine, was shortlisted for a Woman of the Future Award and is a 5-time TEDX speaker. In 2016 she featured in the BBC2 documentary ‘The Big Life Fix’ where Microsoft’s Haiyan Zhang created a bespoke wearable device that allowed Emma to write and draw for the first time in years.

Last year, inspired by the positive impact technology has had on her own life, Emma lead on the creation of the Parkinson’s UK Apps and Devices Library, tried and tested by people living with the condition.

You can find Emma Lawton speaking on...