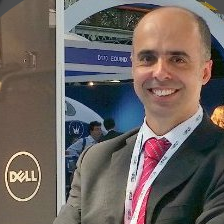 Nuno comes from a hands-on data practitioner background where he developed extensive experience in using analytics to inform, measure, and optimize processes on a variety of industries (B2B and B2C). Nuno has an entrepreneurial spirit with great passion for innovation demonstrated through development and enhancement of numerous successful projects.

Nuno started his career as a Researcher in modelling carbon retention for the paper and pulp industry and later became a Data and Text Mining Consultant having worked across several verticals such as Police&Security, Manufacturing, Environment Sciences, Pharma, Energy, Mining and Insurance.

In 2005 Nuno became Iberian Regional Manager for Statistica, running a team of with sales, technical and admin professionals.

In 2012, Nuno moved to São Paulo, Brazil, to become Regional Manager for Statistica in South America, running a team spread across Brazil and Chile and partner networks in Colombia, Argentina, Uruguay and Ecuador.

In 2014, Nuno joined Dell to be Senior Manager for Advanced Analytics leading the Data Scientists team in EMEA. My work as a Senior Manager was recognized during my time in Dell with a very high score as a Leader. He was also awarded MVP (Most Valuable Player) in 2015.

His focus areas include :