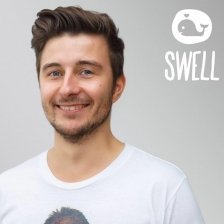 Peter Buchroithner is the CEO & Co-Founder of Swelly.ai, one of the most popular Chatbots on messenger applications (such as Facebook, Viber and Telegram) which was designed to help people make better decisions and get quick, unbiased opinions.
At the ripe age of 13, Peter started writing his first lines of code. Due to the early onset of his entrepreneurial spirit, he soon started pursuing projects in the e-commerce space and subsequently opened his first physical clothing store at the age of 19. It was here that he spent a lot of time observing customers and, along with his enthusiasm for problem-solving, Peter made the move to co-found Swell with Fred Strasser and Philipp Holly, now headquartered in Los Angeles.

Today, Peter is seen as a leader in the opinions & decision-making field and is one of the most recognized speakers in the chatbot space. Peter is a specialist in the start-up scene with a sought-after opinion, having accumulated years of extensive research & experience and earned himself a place on the prestigious Forbes “30 under 30”
list as a serial entrepreneur.

You can find Peter Buchroithner speaking on...

Your Consumer Insights team will soon be led by a robot