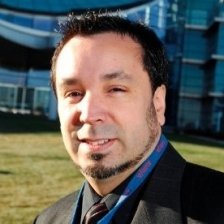 David Chavez is a Vice President responsible for Architecture for Avaya as well as leading Innovational projects, a 51 year-old Systems Architect with 29 years of professional experience.  He credits his exceptional track record of innovation to “creativity and enthusiasm in my approach to solving problems.”

His contribution has been recognized by 88 US patent awards, with many more pending.  David received a B.S. in computer Science and Mathematics from New Mexico State University in 1987 and an M.S. in Mathematics from Colorado State University. Additionally, David supplemented his education with Executive coursework at Stanford Graduate School of Business in corporate strategy.

David was responsible for Avaya’s award winning and market leading IP Communications architecture, and the creator of Avaya’s Next Generation Aura™ architecture launched in 2009, and also the Avaya Mobile Experience launched in 2018.

David has received numerous professional awards including the Avaya Leadership Award, Avaya’s “Leading Edge Innovators” Award, AT&T’s Partner of Choice Award, the Lucent International President’s Award, and the Lucent GROWs Award for his commitment to personal development and the development of others. Additionally, David is a multiple nominee for MIT’s Lemelson Award for Innovation. And a 2013 recipient of the Thomas Alva Edison award.

The products he developed have won many awards, including “Product of the Year” from Network Magazine and “best new business phone system” from Communications Convergence.