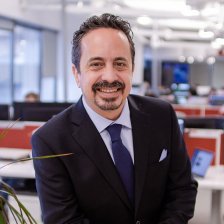 Ruben Buell is the Chief Technology Officer & Chief Operations Officer at Reflex Media Inc overseeing the day-to-day operations of Seeking.com, as well as other dating sites including Dayo, WhatsYourPrice, FirstDate and MissTravel, among others. Originally from Texas, Ruben attended the University of Arlington before beginning his career in the finance industry.

After ten years, Ruben set his sights on being an entrepreneur and helped build and lead a new, large-scale, online dating service at True.com. Leveraging his skills and technical expertise, he simultaneously established and built a technology-driven company focused on developing a state-of-the-art ad-serving system to service the rapidly growing online space.

Ready to take his online dating expertise to the next level, Ruben stepped up to the challenge at Ruby (Ashley Madison) as CTO, shortly after their crippling data breach in 2015. He quickly moved into the president role after only three weeks on the job. Ready to reinvigorate the Ashley Madison brand and platform, he built the infrastructure and team needed to drastically turn around the company by implementing new security measures, increasing member sign ups and expanding globally.

While Ruben and Brandon had met on several occasions, it was Ruben who reached out to Brandon to discuss the possibility of a partnership. A 25 year career executive with over 18 years of experience in online dating, Ruben continues to lead the innovation behind Seeking through recruitment of the worlds best talent to implement advanced technology and solve real world problems in online dating.

When not leading the charge at one of the multiple companies he oversees, Ruben enjoys playing guitar, beach volleyball, attending concerts and spending time with his wife and five sons.

You can find Ruben Buell speaking on...

Panel: Keeping it Ethical in AI